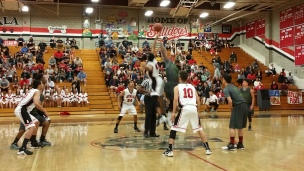 Tuesday night Ayala continued in quarter finals  postseason play, hosting the Perris Panthers.  The game was well attended by fans from both schools.  The Ayala bulldogs had one of their better games of the year.

Perris brought a smaller bench, both in high and quantity.  The panthers Nate Bell a 6″ 1″ senior battle down low all night.  He led their scoring attack with 14 points.  Ayala showed dominance on both ends of the floor.  John Edgar had an outstanding night.  Fortunate as college scouts were in attendances observing his play.  He ended the night with 35 points, 11 field goals, two three point baskets and seven of eight from the striped.  Oscar Pina chipped in with 18 points.  When all was said and done Ayala was victorious by a score of 89-60.

With the victory Ayala moves on to the semifinal round this Friday night at
Loyola high school just east of downtown Los Angeles.  Loyola attack is
led by Henry Welch a 6’10”- 240lb pound senior who has accumulated over
422 points so far this season.  Loyola finished fifth in a very tough
Mission league. They are ranked number 33 in division 2AA. Their record is
15-14 this season.

That’s How I See It

This site uses Akismet to reduce spam. Learn how your comment data is processed.